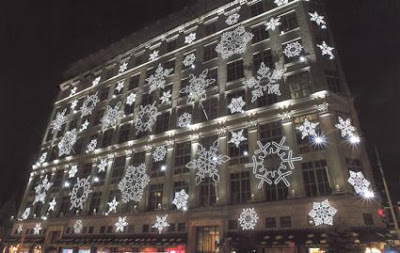 Big stretch.
It’s been a nice long weekend of shopping and our spies have been out in full force. Saks, again, wins the sale game. A 70% off sale– before Thanksgiving or after Christmas– apparently has the same response. Madness!

Our first report comes from Dapper Homme who was on the scene at 7:45. (DP is one of our top special agents. To understand the caliber of shopper, we have to divert a moment to present an example: at a recent unnamed sample sale there was a throng of rowdy women lined down the block and around the corner. DP organized the attendees in such a manner that the sample sale organizers gave him early admittance. This man can easily win the silver metal in Olympic shopping. Sorry, DP, Lila takes gold.)

So, Dapper Homme reports that there were about 150 people lined up, early Saturday morning, for the 70% off Saks doorbuster. Much of the crowed rushed two places: the shoe department and to Chanel handbags. To the dismay of many customers there were only four Chanel handbags on sale. We hear that Chanel sales people spent the entire rest of the day yelling, “We have no more sale bags.” That’s always a fun day at work.

After scoping the main floor, DP headed straight to the ninth floor. For some crazy, wacky, unspecified reason, all mens’ sale items were sent to nine. The disorganization was somewhat like a Barneys Warehouse setup. Unfortunately sales people and customers were equally confused. Dapper had six pair of shoes picked out but his salesperson could only locate mates to three pair. After about 45 minutes of sorting through racks, DP, says he found some of what he wanted, including Kiton shirts for 70% off.

Enough of the men’s stuff. Shoes! Or lady spies report that it was difficult to move at 10022-SHOE. The floor was so crowded that it was nearly impossible to find a sales person to pull a match or charge a purchase. We heard reports of women throwing their credit cards at sales people and buying shoes without even trying them on. YSL Tribute heels for $167 can make people do strange things.

Moving down, floor five was overcrowded, but the designer floor was bliss. Premier ready-to-wear designers, including Dior, were priced 70% off or more. A $2500 Dolce & Gabbana sweater was found for $500. A $750 Marc Jacobs dress was marked down to $160.

The store continued to get more crowded as the day drew on. At about noon there was a 10minute wait to get inside the store– and yes, it was raining!
Shoppers who headed to Saks.com faced similar competition. One reader commented:

Most continuing reports are that Saks is wiped out. We are sure, however, that after-New Years returns, the store will be amply supplied with enough sale merchandise to hold us over until consolidation . Just remember, there’s always something to buy!

< Prev post
Giuseppe Zanotti 50% Off SALE Giuseppe Zanotti Design Boutique 50% *off Original Prices Fall/Winter 2009 *no adjustments to prior purchases, all sale items are...
Versace 50% Off Remember Versace? Yes, they are still around and the boutique is hosting a 50% off sale. A 50% off sale... 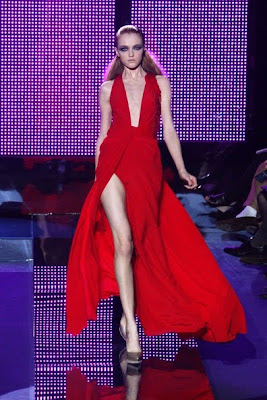