Shoppers are all waiting for department stores to officially take another markdown. Signs in stores and online at Saks and Bergdorfs read, “Save up to 60% off.” As we’ve been browsing online and in stores, however, the numbers haven’t been adding up.

Take Bergdorf Goodman as an example: The sale merchandise from the third floor is all consolidated into one section of the floor with signs above every rack stating that markdowns are up to 60% off. We first found a Gautier dress that was $495 to start but reduced to $149. Math may not be our strongest skill but isn’t that 70% off? Then we found a Peter Som jacket reduced to $389 from $1,295. Again, that’s 70% off.

Before you grab your gloves, scarf, hat and coat– let us warn you that most merchandise is 60% off and what’s left is not part of the season’s highlights. Shoes at Bergdorf are still just 30% off. A sales person says another markdown is still over a week away but even with the modest discount there isn’t a great variety of styles.

Over at Saks we found a similar situation. The sale is advertised as up to 60% off but we found Jil Sander pants for 65% off. At Saks online we found a Brian Reyes dress reduced closer to 65% off along with a Dior dress, an Akirs sweater and Alexander McQueen leggings. All the shoes, in Saks, were discounted 60% but most styles aren’t worth the closet real estate.

Why would stores markdown merchandise more than they are advertising? Perhaps it’s backlash from last year’s sales. Department stores got so much heat from suppliers that they are nervous to discount their merchandise. With the new collections filling store space, there isn’t much of a choice. So be sure to look carefully at the prices. They may be better than advertised.

As a side note, we hear that the Saks men’s 9th floor consolidation sale is getting another markdown on Friday. We wouldn’t be surprised if women’s collections were officially reduced to 70% off too. 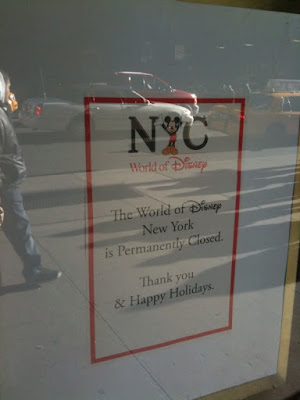 < Prev post
Good-Bye Mickey It’s official, the Disney store has closed their Fifth Avenue location. Construction workers today, were busy removing logos and taking...
A Better Mickey Before our cartoon tears hit the proverbial floor, Racked followed up our story about the Disney store closing with a report...
Next post >